skip to main | skip to sidebar

My husband's tortilla soup was made with some of the last vegetables from our garden. He made the green salsa on top from scratch with some particularly beautiful tomatillos from a friend's garden. 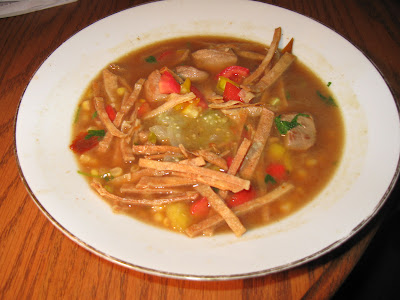 Some of our last tomatoes were already drooping toward the ground when this photo was taken in late October. 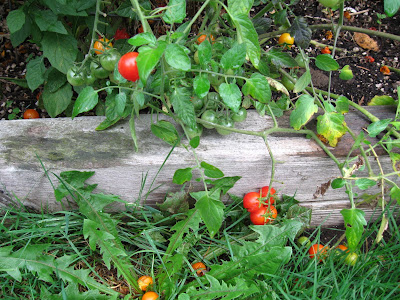 But we were still harvesting a few tomatoes at the beginning of November, which almost never happens in Portland. 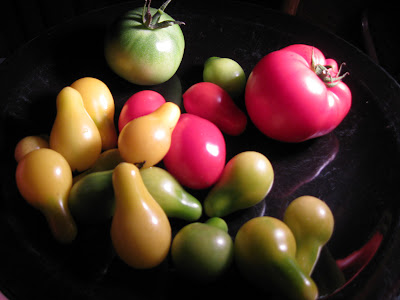 The street we live on is still all decked out in autumn leaves. 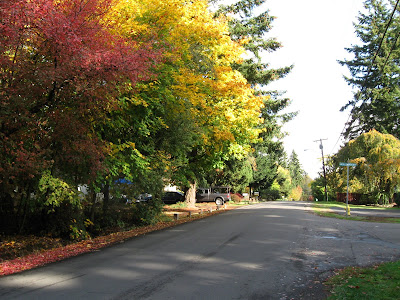 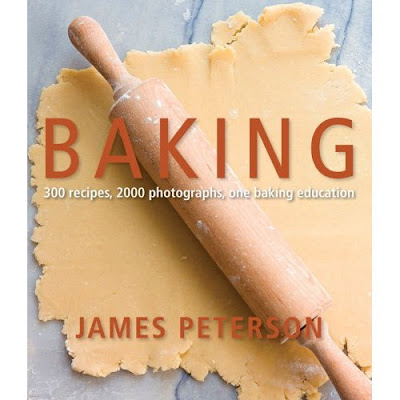 James Peterson is the author of a series of cookbooks on single themes, such as Splendid Soups, Fish and Shellfish, and Vegetables. Each book is much like the others in quality: thorough, extremely helpful, beautiful to look at, and incredibly reliable. I'm understating the case, however, and if you don't believe me you should check out his long string of awards from the James Beard Foundation and the International Association of Culinary Professionals for additional testimony to the excellence of his work.

His latest book, Baking is no exception. I've cooked just one recipe out of it so far, the apricot quick bread. He suggests replacements for the apricots, and I went with dried cherries and pecans. The bread produced has a bit drier and has more integrity than many quick bread recipes, so it slices well and holds up a little better. Oh, and of course it's absolutely delicious. This combination of cherries and nuts photographs (see below) a little like its notorious cousin the fruitcake, so you might need to take my assessment on faith until you can try out this recipe for yourself.

I'm looking forward to replacing my library copy of this excellent book with a copy of my very own. 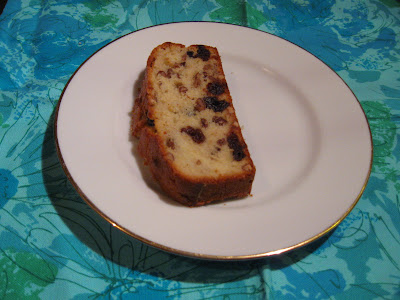 Posted by Flo Finklestein at 11:28 AM No comments:

My dog Muttley has mobility issues. Due to a combination of hip displasia and some neurological problems, her left rear leg has become unreliable. She can walk on it, but only on some surfaces and only for a few steps.

When she was younger she was incredibly energetic, a terror to anyone who knocked on our door, and the scourge of smaller animals. So it's been particularly difficult for her to put up with our efforts to help her around. And by "difficult" I mean that she thinks we're incredibly annoying, not nearly reliable enough, and hopelessly slow. For our part, both my husband and I were exhausted with the effort.

Enter Walkin' Wheels, a wheelchair designed for disabled pets. It took us about a week to get Muttley to use hers, but the training effort paid off, and now she loves her wheels and relies on them. Every day her walks become a little longer. But don't take my word for it: just check out this video of her returning from a walk through our neighborhood. She's starting to get a little tired, but some of her enthusiasm still shows:

Posted by Flo Finklestein at 5:10 PM No comments: 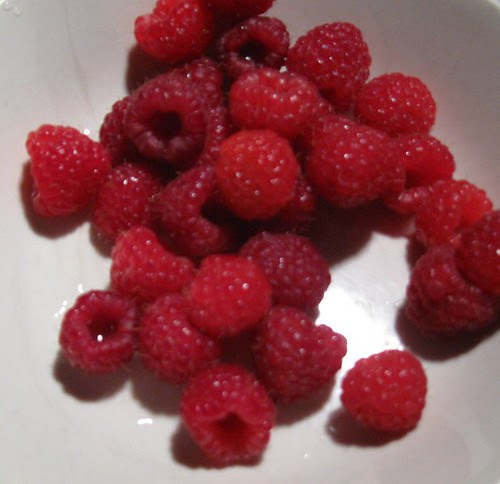 Some very kind friends recently gave us some raspberry bushes. We thought it was a single bush, but turns out they gave us several. We mistakenly planted them all in one little space, but miraculously the bushes nevertheless keep producing berries. They produced an earlier crop during regular raspberry season, and now they've produced another bunch of unexpected and so therefore doubly appreciated berries.

I picked the bunch you see just above and put them in a crepe for breakfast. I still had some whipped cream left from the banana nutella crepes, so I put that in too, making it delicious and probably too sweet for breakfast. But somehow I soldiered on and ate them anyway. 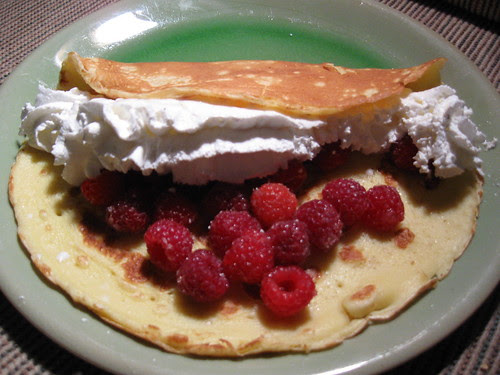 Posted by Flo Finklestein at 5:06 PM No comments: 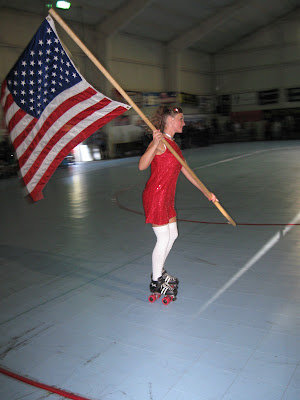 We had a great time watching the Rose City Rollers all-star team, the Wheels of Justice, compete with Duke City's Munecas Muertas this Saturday night in Portland. Above you see Miss Behavin' carrying the flag for the singing of the Star Spangled Banner at the beginning of the game in which Portland defeated the New Mexico team 154 to 69. RCR particularly dominated the ring in the first half.

Watching the Wheels of Justice defense made it easy to see how these women pushed their way to number three in the regional rankings. I'm acquainted with many of the best blockers from their usual roles as jammers on other Rose City Rollers teams, so I was surprised at how well they came together to form a tight defensive network. Typically, one or two blockers would move to freeze out Duke City, Duke City would get around one or both, only to be instantly confronted with another Rose City Roller who appeared as if from nowhere. In the first half, Duke City could barely get their talented jammers through to score even a few points.

Of course the Rose City jammers were excellent too, particularly Scratcher in the Eye, from our favorite team the Heartless Heathers, Rhea DeRange, and White Flight. Below you see the two jammers lined up for the game's first jam. That's Kamikaze Kim from Duke City in the green, and Rhea DeRange from Rose City in the black and purple. 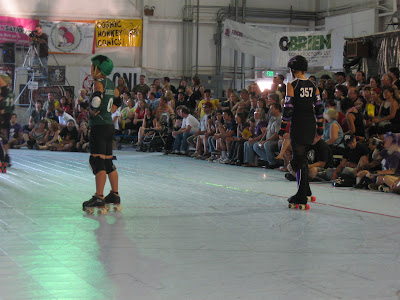 Posted by Flo Finklestein at 1:48 PM No comments:

Dessert expert Gale Gand's new cookbook, "Gale Gand's Brunch!: 100 Fantastic Recipes for the Weekend's Best Meal" is so good that I should return it to the library as soon as possible, before I'm tempted to cook again.

Now I don't want to mislead you. In spite of Chef Gand's expertise with sugar, this is a brunch book, and many of the recipes are not sweet. However, the recipe I chose to make this weekend, the banana nutella crepes, are so full of sugary, chocolaty goodness that I served them as an after-dinner dessert. I also made the nutella, a blend of roasted hazelnuts and chocolate, from scratch, using another recipe in the book.

You can see the consequences below. You'll want to put a less nutella and more bananas and whipped cream on your crepe, and certainly make them thinner. In fact, that's the way I made the rest of the batch, but this particular crepe looked best in the picture, probably because the eye always wants more nutella than the stomach can reasonably be expected to digest. 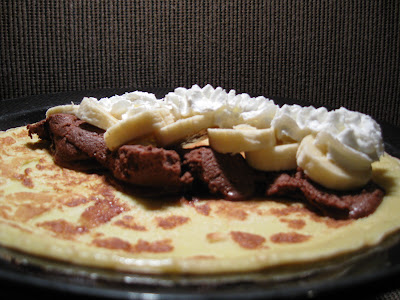 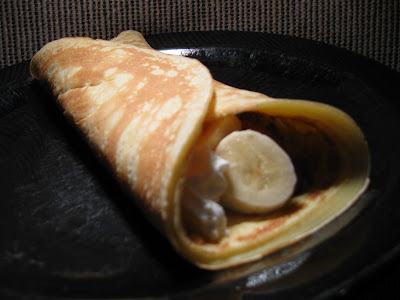 Posted by Flo Finklestein at 11:05 AM No comments: 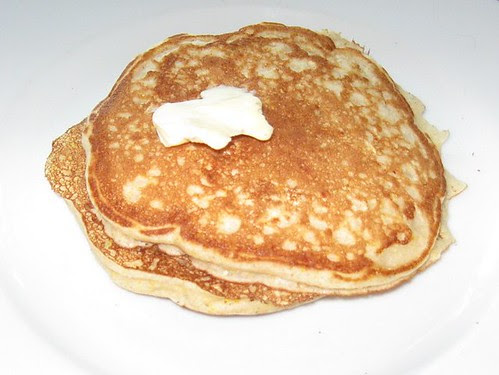 I got this excellent recipe for multi-grain pancakes out of Pam Anderson's recent cookbook The Perfect Recipe for Losing Weight and Eating Great. The pancakes have a mix of all-purpose flour, cornmeal, oatmeal, and whole wheat flour yet manage to taste so good I could eat them every day. I do wonder, however, how I'm supposed to lose weight eating food that tastes this good, even if it is good for me. But I am counting on these excellent pancakes to save my arteries (note that the butter in the picture is faux) from my sudden obsession with omelets.
Posted by Flo Finklestein at 2:21 PM 2 comments: 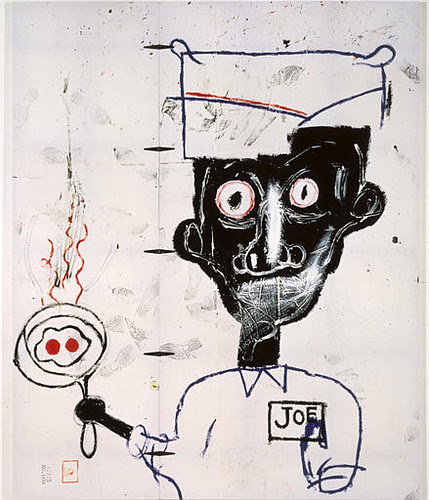